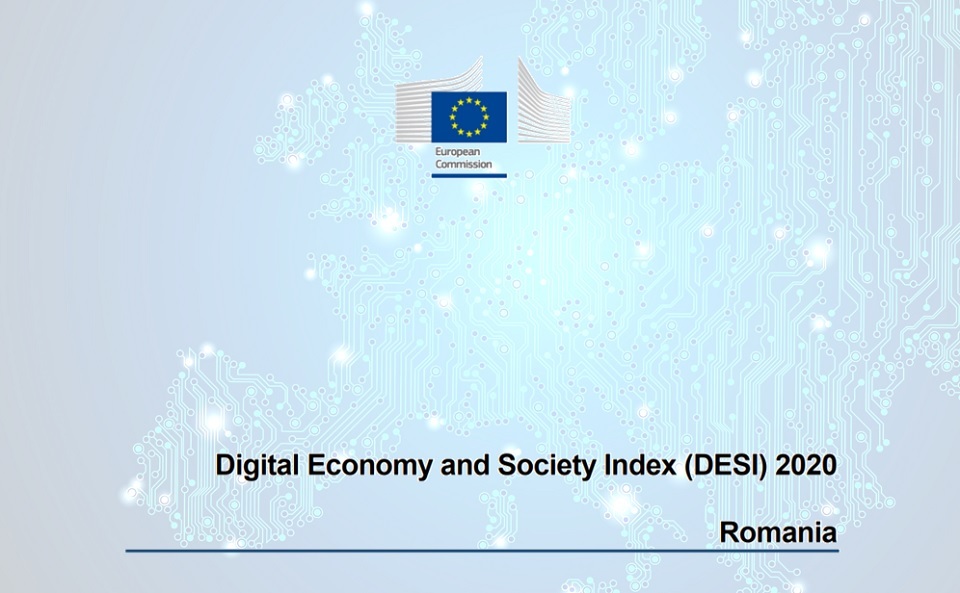 Romania ranks 26th out of 28 EU Member States in the 2020 Digital Economy and Society Index (DESI), recently published by EC.

The full report can be found here:  https://ec.europa.eu/digital-single-market/en/scoreboard/romania

Based on data prior to the pandemic, Romania’s performance was the same in four of the five DESI dimensions measured. This is due to slow progress overall, but also due to political developments, as Romania has had four different governments over the last 3 years. Romania performs best on Connectivity dimension, thanks to the high take-up of ultrafast broadband and the wide availability of fixed very high capacity networks, especially in urban areas. 49% of Romanian homes subscribe to ultrafast (at least 100 Mbps) broadband, the fifth highest figure in the EU.

However, digitisation of the economy lags behind, almost one fifth of Romanians have never used the internet, and less than a third have at least basic digital skills. Romania is well positioned as regards ICT graduates, as it ranks fifth, with 5.6% of all graduates (EU average: 3.6%), but on Digital public services and on Use of internet services, Romania has the lowest performance among the EU Member States. In February 2015, Romania adopted its National Strategy on the Digital Agenda for Romania for 2020 (SNADR(1) ) setting out four areas of action. The degree to which Romania has met the commitments of the strategy is unknown. It is also unclear whether Romania plans to evaluate the strategy’s implementation and whether it intends to present a report on the state of play

Romania ranks 11th in the Connectivity dimension. In 2019, it improved in terms of coverage while stagnating in terms of take-up. Notably, fast broadband coverage increased to 82% but still lags behind most Member States (EU average of 86%). Broadband take-up stalled at 66 % of households in the third year in a row and it is well below the EU average of 78%. The strong infrastructure-based competition in Romania, mainly in urban areas, is reflected in the indicators in which the country performs very well, namely fixed very high capacity network (VHCN) coverage and at least 100 Mbps fixed broadband take-up (68 % and 49 % respectively). However, Romania’s urban-rural digital divide is illustrated by the figures for VHCN coverage, where only 39% of rural areas are covered (albeit, double the EU average of 20%). As regards take-up of at least 100 Mbps broadband, Romania still largely outperforms the EU average (49% versus 26%) a 4 percentage point improvement compared to last year. Romania lags behind on 4G coverage (85%, well below the EU average of 96%). The mobile broadband take-up indicator that stagnated in the past year places Romania amongst the least performing Member States, despite the significant drop in broadband prices. Romania ranks first in the EU in terms of broadband prices when analysing all product baskets (fixed, mobile, converged). It is leading in terms of mobile and converged baskets with an index of 97 and 91 respectively. In terms of fixed broadband prices, Romania ranks second in the EU.

Romania scores 21% in the 5G readiness indicator(11) , same as the EU average. Overall, in Romania, 38% of the spectrum harmonised at EU level for wireless broadband has been assigned. A national strategy for the implementation of 5G in Romania was adopted in June 2019. The document expects an impact on the Romanian economy of 250,000 jobs and €4.7 billion in revenues. The National Strategy foresees the organisation of a multi-band spectrum auction in the 700 MHz, 800 MHz, 1500 MHz, 2600 MHz and 3400-3600 MHz bands. However, the auction process was delayed until the second quarter of 2020. The reasons behind the delay are: (i) the adoption of Emergency Ordinance No 114/2018(12) setting high reserve prices beyond European benchmark levels and increased minimum fees for the renewal of existing licences; and (ii) the transposition into national legislation of the memorandum signed by Romania with the US State Department on the security of 5G infrastructure. While 5G licencing seems to be on track, the cumbersome authorisation process could prove to be a serious bottleneck for the deployment of 5G infrastructure.

Romania ranks 27th out of 28 EU countries on Human capital and its ranking stagnated in comparison to the previous year. At least basic digital skills and at least basic software skills levels rank 27th among EU Member States. Less than one third of people aged between 16 and 74 have at least basic digital skills (58% in the EU as a whole), while 35% have at least basic software skills (against an EU average of 61%). As for above basic digital skills, Romania is last in the EU with only 10% of individuals. Although there was a slight increase on the previous year in the percentage of ICT specialists, they represent a much lower proportion of the workforce than in the EU as a whole (2.2%, against an EU average of 3.9%). Female ICT specialists account for 1.2% of total female employment. In contrast, Romania is performing well with regard to ICT graduates, ranking 5 th among EU Member States, with 5.6% of all graduates. The Ministry of Education and Research is implementing the 2014-2020 national strategy for strengthening public administration. In addition, the Ministry is implementing an administrative simplification project for the national education system, with a budget of RON 28 million (approx. €6 million) from SIPOCA (Structural Instruments under the Administrative Capacity Operational Programme).

USE OF INTERNET SERVICES

The Use of internet services in Romania continues to be the lowest among the EU Member States, which is in correlation with the low level of basic digital skills around the country (see previous chapter). 18% of individuals aged 16-74 have never used the internet (EU average: 9%). Nevertheless, there are two online activities in which the country ranks 6 th in the EU. These are the use of social networks (82%, versus an EU average of 65%) and video calls (67%; EU average: 60%). In contrast, the use of online banking (11%), shopping (29%), reading news (55%), as well as the consumption of music, videos and games online (63%), is lowest among EU Member States, mainly due to a lack of trust in digital technology. The low level of online banking is also due to more than two out of five (42%) (16) Romanian adults not having a bank account. Only 3% of Romanian internet users sell online and 4% follow online courses

Romania ranks 27th among EU countries on the Integration of digital technology by businesses, well below the EU average. Romania’s ranking remained stable in this area compared to the last 2 years. There was almost no change in any of the indicators. 23% of Romanian enterprises share information electronically, while only 8% use social media (EU average: 25%). There was a slight improvement in the share of SMEs selling online, from 8% in 2017 to 11% in 2019, but this remains well below the EU average of 18%. SMEs are increasingly selling online across borders, but this applies to only 6% of the total number of SMEs, compared to an EU average of 8%. Romania does not have a national digital transformation strategy for enterprises. Romania supports the ecosystem of start-ups through the Start-up Nation programme, including start-ups that produce innovations or integrate them into new product and service developments.

In Romania, there are currently three hubs for digital innovation (HDIs), one in Bucharest and two in Cluj-Napoca.

On Digital public services, Romania ranked last among EU Member States during the last 3 years. Romania does rank eighth for e-government users, with 82% of internet users, versus an EU average of 67%. However, this high level of online interaction between public authorities and the public concerns only those internet users who need to submit forms. The low scores for pre-filled forms and online service completion, where the country ranks 28th, indicate a systemic problem with the quality and usability of the services offered. There was no improvement in digital public services for businesses, for which Romania also ranks last.

The lack of interoperability of IT systems in the public administration has been an issue for years, one that no government has yet managed to resolve. In June 2019, a public consultation was launched on the draft law establishing a national reference framework for achieving interoperability in ICT (‘CNRTIC’). The aim is to bring to fruition the vision expressed in the 2017-2020 programme of the government (specifically in the chapter on ‘Policies in the field of communications – Digital convergence’), to achieve a simplification of procedures and reduction of bureaucracy through e-government. The draft law would establish a general framework to manage the interoperability of the IT systems of public institutions that provide services to the public. The draft law is currently pending before Parliament. Romania’s eIDAS (electronic identification) node is still in the process of being built through an ERDFfinanced project (‘SITUE’) that should be finalised by the end of 2020. The high cost of a qualified digital signature (around €40/year per user) is the main challenge when it comes to providing a digital identity for all citizens.

The main barriers to achieving digital public services in Romania are: (i) the lack of coordination between public institutions in setting up such services; (ii) the migration of IT specialists from the public sector to the private sector or to other countries; and (iii) the overall lack of digital skills. A well implemented eGovernment solution would help enterprises to carry out their business with government more easily, more quickly and at lower cost. The adoption of the Interoperability Law and its implementation by all public bodies involved would be a first step towards improvements in digital public administration. 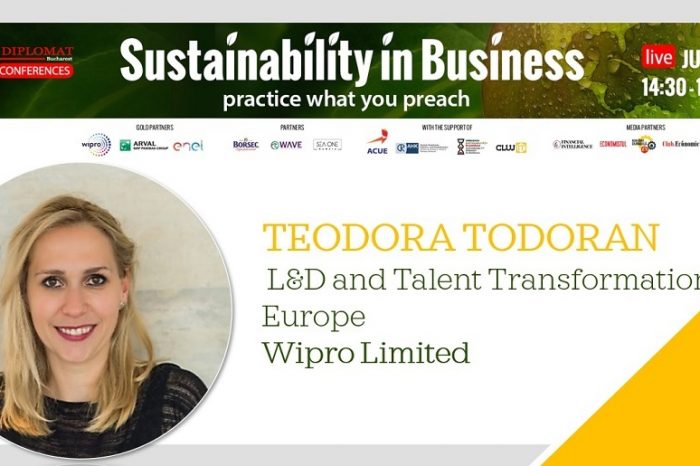 Teodora Todoran, Wipro: Education is the goal of sustainable development 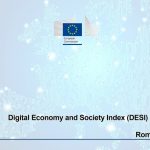